FOR THE FORMER CHILD SOLDIERS’ CHILDREN

ABDUCTED BY THE LORD RESISTANCE ARMY

In 2020, MAPS and the Ugandan association YOLRED launched a project aimed at combating the social and economic marginalization of former child soldiers abducted by the Lord Resistance Army (LRA)

A project financed by Fondazione Prosolidar

Over the past 30 years, the territory of Northern Uganda has been the scene of armed incursions by the Lord Resistance Army (LRA), a subversive military group that aimed to overthrow President Museveni’s government and establish one based on biblical commandments.

Known for the brutality of its actions on the population and for having violently recruited girls and boys into its militia, the LRA is held responsible for the deaths of more than 100,000 people and the displacement of 2.5 million people who lived in temporary reception camps.

YOLRED has born from the social commitment of former child soldiers who, now adults, are closely observing the long shadow of the difficult reconciliation process that followed the official dismantling of the LRA militias in Uganda and the return of the former child soldiers to the communities of origin. 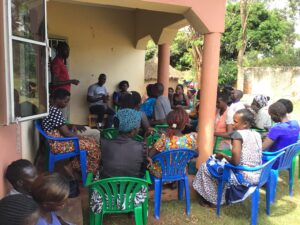 YOLRED denounces strong stigmatization against the families of former child soldiers who returned to traumatized communities at the end of the civil war. Many attempts to reconciliation between former combatants and victims belonging to the same communities have failed because the war has generated strong economic differences between those who somehow survived within the community and those who were kidnapped and have returned later. Most of the children who were abducted were from rural areas, where economic and educational opportunities are lower than the Gulu area. There are few low-level schools, often far away from the villages. Those who were kidnapped often found families in vulnerable economic conditions on their return. As a result, the children had fewer opportunities to go to school, thus favouring the marginalization of the whole family.

To address this complexity, MAPS is closely working together with Yolred in order to identify effective second-level reconciliation strategies that may allow the children of ex-combatants to have equal opportunities to build their adult life. The goal is to bypass the negative effects of the social stigma towards the families of the ex-combatants and thus encourage indirect re-integration.

In 2020, Prosolidar Foundation funded a project designed by MAPS and YOLRED and aimed at providing the children of former child soldiers, and other vulnerable children in the community, with an opportunity to raise their socio-educational status by attending standard-level primary schools. In fact, a key problem that currently slows down the reintegration process with the communities is the scarce possibility of the children of the families of former rebels to attend adequate schools and thus obtain valuable professional training. The idea is to promote a generational gap that will provide supported individuals – and their families – with greater socio-economic opportunities given by sufficient education. This will positively influence the integration between families and the community of origin. In addition to school support and related tutoring, the project will see the implementation of community activities capable of supporting the integration process.

To support the implementation of this project, MAPS members will combine their skills and experiences with the strong presence of YOLRED on the local territory, considering the important role that the Ugandan association has as a group formed by former child soldiers who have managed to find a new – important – role in the Gulu community.